Ratman: The Trial and Conviction of Whitey Bulger (Paperback) 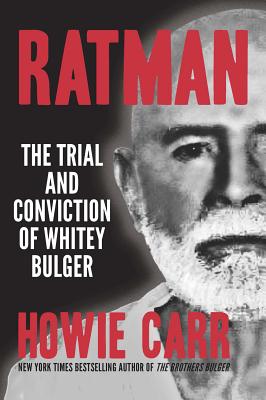 By Howie Carr
Email or call for price
Hard to Find

Howie Carr is the author of two New York Times best-sellers, The Brothers Bulger and Hitman. His most recent book, Rifleman, is a look into the life and mind of Whitey Bulger s partner, Stevie Flemmi. Carr has been writing about Whitey Bulger for more than 30 years. Before Bulger fled in 1994, Carr was such an implacable foe of the serial killing gangster that Whitey and a henchman allegedly tried to kill him as he left his house in suburban Boston an incident reported in 2006 on 60 Minutes. This summer, Bulger unsuccessfully tried to have him banned from the courtroom. Bulger s younger brother, Billy Bulger, thenpresident of the Massachusetts State Senate, publicly referred to Carr as the savage. Ratman is the last chapter, completing a series of fascinating books detailing organized crime in Boston. Carr is a columnist for the Boston Herald, host of a daily syndicated four-hour radio program heard throughout New England, and a member of the national Radio Hall of Fame in Chicago"