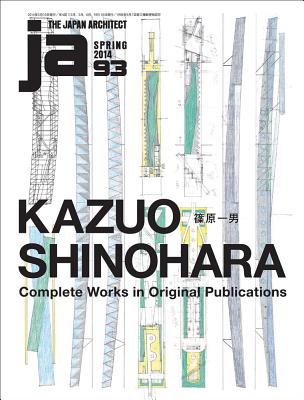 -JA93 features the complete works of Kazuo Shinohara and showcases his approach to post-war Japanese architecture starting with the 1954 "House in Kugayama", to his posthumous and unbuilt "House in Tateshina Project" Kazuo Shinohara is known globally as an architect representative of Japan's post-war era and JA93 is devoted to his complete works. Most of his designs have been for private residences and many of.the projects have been published in magazines and other media. The manner in which his work was represented was very important to him and he was known to be selective in choosing the photography, diagrams, and descriptions that were published. Shinohara previously collaborated on how his work was included in Shinkenchiku and JA, this issue combines this content into a complete works edition. From the "House in Kugayama" in 1954, to his posthumous and unbuilt work of the "House in Tateshina Project", these projects showcase his approach towards architecture. Since his passing in 2006, Shinohara has been awarded with the special commemorative Golden Lion from the Venice Biennale and a series of retrospective exhibitions were held in China and the United States. Text in English and Japanese.

JA - the Japan Architect - was first published in June 1956 and was the only English language periodical that introduced Japanese architecture to an overseas audience. Since 1991 it has been published as a quarterly journal in both Japanese and English, expanding its readership both inside and outside of Japan. Today's JA showcases contemporary Japanese architecture with in-depth commentary on the theoretical history and context of the projects. It is organized with an emphasis on developments originating in Japan. The magazine surveys the country's diverse, ever-changing architectural scene, identifies important trends to convey to a wider audience outside Japan, takes up current, compelling issues and considers the latest architectural trends.