God Sings!: (and Ways We Think He Ought To) (Paperback) 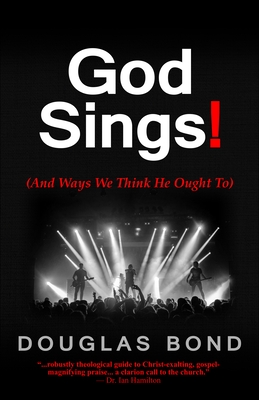 God Sings (And Ways We Think He Ought To) is an investigation, comparing and contrasting how God and his people sing in the Bible, and in two millennia of Church history, with how Christians are attempting to do so in recent decades--with the best of intentions--in an entertainment ethos.

It would be impossible to overstate the role of singing in the Bible. Everywhere you turn people are doing it. The book of the Bible with more pages, verses, and chapters than any other is a book of songs, the Psalms, right in the very middle of the Bible. During his earthly ministry Jesus often quoted psalms, and while dying on the cross, some of his final words were from those inspired lyrics.

Singing must be of great importance to God, whom Zephaniah tells us "exult s] over us] with loud singing" (3:17). God himself sings. If singing is so important to God, it must be of essential importance to every Christian. The purpose of this book is to explore how God sings, and how he must want his people to sing back to him in corporate worship. God Sings explores the incompatibility of attempting to express the timeless enduring gospel of Jesus Christ with a transient entertainment medium, and contrast the biblical ethos of worship (and the ethos of nearly two millennia of corporate worship practiced in Church history), with the entertainment ethos shaping congregational singing in the majority of evangelical churches in recent decades.

The author's ultimate purpose is grounded in what Paul wrote: "Let the word of Christ dwell in you richly as you teach and admonish one another with all wisdom, and as you sing psalms, hymns and spiritual songs with gratitude in your hearts to God. And whatever you do, whether in word or deed, do it all in the name of the Lord Jesus, giving thanks to God the Father through him" (Colossians 3:16-17).

Douglas Bond is author of more than twenty-five books of historical fiction, biography, devotion, and practical theology, including several books now in Dutch, Portuguese, and Korean. Two-book Grace Award finalist (The Revolt and The Battle of Seattle, 2016), Bond is director of the Oxford Creative Writing Master Class, is adjunct instructor in church history and creative writing at three institutions of higher learning, and leads Church history tours in Europe. Married to his wife Cheryl since 1983, they have been blessed with six children and five grandchildren. ​ He is adjunct Instructor in Church History at Western Reformed Seminary (WRS) where his Church history tours can be taken for graduate elective credit. Along with the Oxford Creative Writing Master class, his church history tours can be taken for university level credit at New College Franklin. Bond has earned a Masters in Teaching (MIT) from St Martin's University, and a Preliminary Certificate in Theology from Moore Theological College, NSW Australia. ​ He has taught English and history for many years, and was awarded by the Pierce County Library Foundation and Arts Commission the "2005 Teacher Award" for teaching young adults how to write; his high-school-aged writers have consistently dominated local and regional writing contests, including a 1st, 2nd, and 3rd place sweep of the three-state and British Columbia Optimist 2015 essay writing contest; the Optimist Club awarded Bond the 2015 "Teacher of the Year." Bond frequently speaks on writing at various conferences. Additionally, Bond has ministered overseas in Western Australia, Peru, the Kingdom of Tonga, and with Equipping Leaders International (ELI) in Uganda. ​ He is on the advisory board of Glorious Films (Montreal) with Derek Thomas, Michael Haykin, and others (2014). In the Psalms Project (2009), funded by the Lilly Foundation, Bond was selected to be a speaker at Union University and to contribute a chapter to the book Forgotten Songs. As a hymn writer and author of several books on hymn writers and hymnody, Bond was asked to be a consultant for the Canadian Broadcasting Corporation's (CBC) special feature series on Christian hymns, God's Greatest Hits (2012). His NEW REFORMATION HYMNS album with Greg Wilbur and Nathan Clarke George released in 2017; a growing number of his hymns are being sung in churches and at conferences. ​ Bond is a ruling elder in the PCA, has served on a Presbytery committee, and in 2015 was elected to the permanent committee which oversees the campus ministry Reformed University Fellowship (RUF); he now serves as an advisory member to the RUF Permanent Committee in Atlanta, GA. ​ As an outgrowth of his books and teaching, Bond has led church history tours in Europe since 1996, and has also been consulted on a history documentary film on the Reformation. Meridian Filmworks is in negotiation with Bond's publisher to create a major motion picture of his Scottish Covenanter signature novel Duncan's War. ​ Frequently interviewed on Christian radio stations, Bond was featured in French newspaper Le Midi Libre (1/18/2015) on his book HAMMER OF THE HUGUENOTS, researched and written on-location in France. Additionally, Bond's articles on church history and theology have appeared in Modern Reformation, Table Talk, byFaith (author interview), Western Reformed Seminary Journal, Light and Life magazines, and in the Aquila Report. In addition to leading church history tours, Bond often lectures at conferences on literature and church history, including speaking at several Ligonier West Coast Conferences.