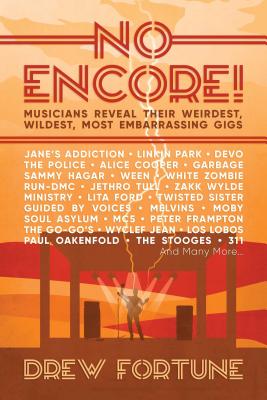 Featuring never-before-told stories, No Encore! takes you on tour with over sixty iconic musicians as they relive their weirdest, wildest, most embarrassing gigs.

"A relataively jovial, upbeat book that I raced through. The embarrassment is palatable, but perseverance is the most touching part of these stories. These awful things that happened don't interrupt the dream. The dream of performing and stardom. The dream of connecting with an audience. No Encore! is a glimpse into the analog past; a trip to a distant world when artists made albums and suites of songs you listened in order." —Bret Easton Ellis

“They hated us and started throwing cups, bottles, change, chairs, and anything that wasn’t nailed down.” —Dean Ween

This hilarious, sometimes horrifying, collection spans four decades and chronicles the craziest, druggiest, and most embarrassing concert moments in music history—direct from the artists who survived them.

“In the midst of my insanity, I thought it would be a very romantic gesture to go into Fiona Apple’s dressing room and write a message on her wall in my own blood.” —Dave Navarro

From wardrobe malfunctions to equipment failures, from bad decisions to even worse choices, this is a riveting look into what happens when things go wrong onstage and off.

“Ozzy had a sixty-inch teleprompter with the song lyrics, and that got stolen, along with microphones, snare drums and cymbals. Our drummer at the time was stabbing people in the neck with his drumstick.” —Zakk Wylde

No Encore! is an unflinchingly honest account of the shows that tested the dedication to a dream—from Alice Cooper’s python having a violent, gastric malfunction on stage to Lou Barlow’s disastrous attempt to sober up at Glastonbury, from Shirley Manson’s desperate search for a bathroom to the extraordinary effort made to awaken Al Jourgenson as Ministry was taking the stage. As Hunter S. Thompson famously wrote, “Buy the ticket, take the ride.”

“I go to exit the venue, and there’s 25 people marching towards us. It’s about 3:00 AM, and they weren’t there to be nice. They were carrying bats, boards, chains, hammers, and they were coming for us.” —Dee Snider

Drew Fortune is a pop-culture journalist and screenwriter, who has been actively publishing for the past ten years. He is a regular contributor to Vanity Fair, Rolling Stone, Esquire, and Vulture, but his writings on music, film, and television have been published in Cosmopolitan, Playboy, SPIN, Billboard, the A.V. Club, Stereogum, and many others. His favorite bands are Ween, Superchunk, and the Replacements. He loves fly fishing and loitering in record stores.

"No Encore! is a very entertaining read, and demands a sequel."
— Brooklyn Vegan