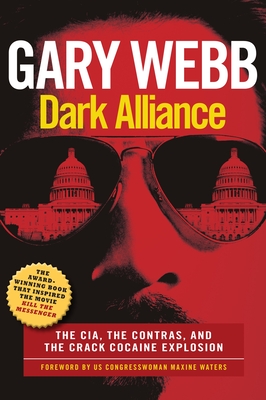 By Gary Webb, Maxine Waters (Foreword by)
Email or call for price
Hard to Find

Major Motion Picture based on Dark Alliance and starring Jeremy Renner, "Kill the Messenger," to be be released in Fall 2014

In August 1996, Pulitzer Prize-winning journalist Gary Webb stunned the world with a series of articles in the San Jose Mercury News reporting the results of his year-long investigation into the roots of the crack cocaine epidemic in America, specifically in Los Angeles. The series, titled “Dark Alliance,” revealed that for the better part of a decade, a Bay Area drug ring sold tons of cocaine to Los Angeles street gangs and funneled millions in drug profits to the CIA-backed Nicaraguan Contras.

Gary Webb pushed his investigation even further in his book, Dark Alliance: The CIA, The Contras, and the Crack Cocaine Explosion. Drawing from then newly declassified documents, undercover DEA audio and videotapes that had never been publicly released, federal court testimony, and interviews, Webb demonstrates how our government knowingly allowed massive amounts of drugs and money to change hands at the expense of our communities.

Webb’s own stranger-than-fiction experience is also woven into the book. His excoriation by the media—not because of any wrongdoing on his part, but by an insidious process of innuendo and suggestion that in effect blamed Webb for the implications of the story—had been all but predicted. Webb was warned off doing a CIA expose by a former Associated Press journalist who lost his job when, years before, he had stumbled onto the germ of the “Dark Alliance” story. And though Internal investigations by both the CIA and the Justice Department eventually vindicated Webb, he had by then been pushed out of the Mercury News and gone to work for the California State Legislature Task Force on Government Oversight. He died in 2004.

An award-winning investigative reporter, GARY WEBB (1955–2004) is best known for his “Dark Alliance” series that linked a Northern California drug ring with the CIA and the United States’ burgeoning crack epidemic. When the story first appeared in 1996 on the website of the San Jose Mercury News, it became an unprecedented internet sensation, receiving up to 1.3 million hits daily. The report was the target of a famously vicious media backlash that ended his career as a mainstream journalist. When Webb told the whole story in the book Dark Alliance, some of the same publications that had vilified him retracted their criticism and praised his courage in telling the truth about one of the worst official abuses in our nation’s history. Others, including his own former newspaper and the New York Times, continued to treat him as an outlaw. Before joining the Mercury News, Webb cut his journalism teeth at the Kentucky Post and Cleveland Plain Dealer. He is the co-recipient of an Investigative Reporters and Editors Award (for a story at the Post about links between the Kentucky coal mining industry and organized crime) and a Pulitzer Prize (as part of a team at the Mercury News covering the 1988 San Francisco Earthquake). Dark Alliance won the 1998 Firecracker Alternative Book Award in the Politics category, and was a finalist for the PEN/Newman’s Own First Amendment Award. In 2014 Webb’s story was adapted into the major motion picture Kill the Messenger. His death in 2004 was ruled a suicide.

"Webb reminds us that the Reagan-approved contra program attracted lowlifes and thugs the way manure draws flies. He guides the reader through a netherworld of dope-dealers, gunrunners, and freelance security consultants, which on occasion overlapped with the US government. He entertainingly details the honor, dishonor, and deals among thieves.... All in all, it's a disgraceful picture—one that should permanently taint the happy-face hues of the Reagan years." —David Corn, Washington Post

"Two years ago Gary Webb touched off a national controversy with his news stories linking the CIA and the Nicaraguan Contras to the rise of the crack epidemic in Los Angeles and elsewhere. His gripping new book, richly researched and documented, deserves an even wider audience and discussion." —Peter Dale Scott, San Francisco Chronicle

"Webb [is] a highly regarded investigative reporter.... Dark Alliance is his effort to tell his side of the story and set the record straight." —James Adams, New York Times Book Review