Don't Tell Mom I Work on the Rigs: She Thinks I'm a Piano Player in a Whorehouse (Paperback) 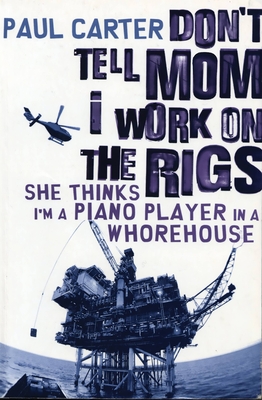 A rollicking, crazed, sometimes terrifying, usually bloody, and incredibly funny ride through one man's adventures in the oil trade
Since age 18, Paul Carter has worked on oil rigs in locations as far flung as the Middle East, Columbia, the North Sea, Borneo, Tunisia, Sumatra, Vietnam, Nigeria, Russia, and many others--and he's survived (so far!) to tell stories from the edge of civilization (places, as it happens, upon which most of our lives rely).
Carter has been shot at, hijacked and held hostage, almost died of dysentery in Asia and toothache in Russia, watched a Texan lose his mind in the jungles of Asia, lost a lot of money backing a scorpion against a mouse in a fight to the death, and served cocktails by an orangutan on an ocean freighter.
Taking postings in some of the world's wildest and most remote regions - not to mention some of the roughest rigs on the planet--Carter has worked and gotten into trouble with some of the maddest, baddest and strangest people you could ever hope not to meet.

Paul Carter, an avid motorcycle enthusiast and artist, lives in Sydney, Australia, when he's not working on oil rigs.