A City Through Time (Hardcover) 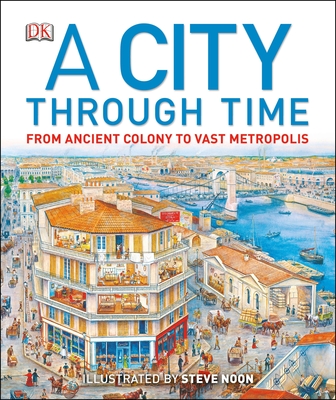 Revised and updated for a new generation!

In the bestselling A City Through Time, readers are invited to follow the progress of an imaginary city through six key periods of time, each captured by a scene of the city and zooming in on key buildings like a Roman bathhouse, medieval castle, and a modern skyscraper. Illustrations by award-winning artist Steve Noon provide a unique history of city life, transporting readers from an early Greek settlement to an industrial metropolis, while pull-outs surrounding the illustrations introduce the reader to the people who lived there, from Greek slaves to modern-day commuters.

New to this edition is a photographic section exploring amazing real-life cities — from ancient Babylon to Constantinople to 21st-century Tokyo.

Steve Noon is an artist from Kent, England. Educated at Art College in Cornwall, he is the illustrator of A City Through Time, A Port Through Time, and A Street Through Time, as well as The Story of the Nile and The Story of the Titanic. He has received numerous awards for his illustrations, including the Shankei Children’s Literature Prize in 2001 and the Longman History Today History Book of the Year in 2000.Philip Steele is the author of many nonfiction books for children. He has worked for publishers such as Dorling Kindersley, Quarto, HarperCollins, Macmillan, and numerous others. Steele also writes tourism and guide books for adults, display text for museums and libraries, and facts for websites. He regularly attends the London Book Fair.