So This is Permanence: Joy Division Lyrics and Notebooks (Hardcover) 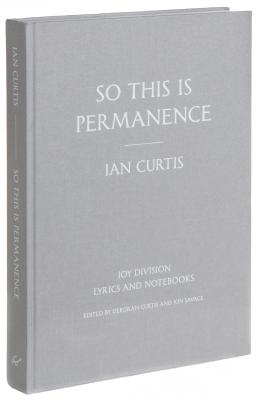 So This Is Permanence presents the intensely personal writings of one of the most enigmatic and influential songwriters and performers of the late twentieth century, Joy Division's Ian Curtis.

The fact of the band's relatively few releases belies the power and enduring fascination its music holds, especially in light of Curtis's tragic suicide in 1980 on the eve of the band's first American tour.

Reproduced in this beautiful clothbound volume are Curtis's never-before-seen handwritten lyrics, accompanied by earlier drafts and previously unpublished pages from his notebooks that shed fascinating light on his writing and creative process.

Also included are an insightful and moving foreword by Curtis's widow Deborah, a substantial introduction by writer Jon Savage, and an appendix featuring books from Curtis's library and a selection of fanzine interviews, letters, and other ephemera from his estate.

Deborah Curtis is the author of Touching from a Distance: Ian Curtis and Joy Division. She lives in Cheshire, England.

Jon Savage has been writing about music for a range of publications since 1977. His books include the classic England's Dreaming: Sex Pistols and Punk Rock. He lives in North Wales.

"Beautifully bound and printed, So This is Permanence is primarily a set of facsimiles: the lyrics of Joy Division's Ian Curtis on note paper, complete with lines scratched out in pen. But the introductions by Curtis' wife Deborah and critic Jon Savage are revealing and insightful on the erudite performer undone by epilepsy and the mounting pressure of stardom. After Curtis' 1980 suicide, Joy Division regrouped as New Order. He left behind a parcel of intriguing, disturbing songs, including the unforgettable impression of an impending breakup, 'Love Will Tear Us Apart.'"
-Shepherd Express

Holiday Gift Guide Pick
"'This is Permanence' reveals the personal writings of Joy Division lead singer and influential songwriter Ian Curtis in a beautiful cloth-bound anthology. Curtis committed suicide in 1980 before the British band's first US tour, and the book includes a foreword by his widow, Deborah, as well as song lyrics, an appendix listing his personal book library and a selection of interviews from his relatively short but important career."
-Cool Hunting

"So This Is Permanence collects his handwritten words, setting them next to typeset versions of what they would become. (Sometimes they're the same, but there are plenty of differences.) The book-lovely and clothbound to resemble the band's posthumous collection Still-also features reproductions of old fan letters and flyers that Curtis' widow had kept."
-A.V. Club

Holiday Gift Guide Pick "Permanence offers rare personal insight on an artist otherwise basked in mystique. His poetic brilliance, ominous and beautiful, remains startling even when stripped of its aural component and regardless of a familiarity with the group's chilling post-punk."
-Austin Chronicle