The United States of Trump: How the President Really Sees America (CD-Audio) 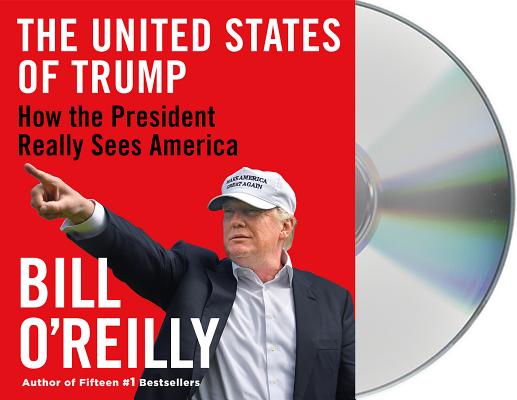 This program includes an introduction read by the author.

A rare, insider’s look at the life of Donald Trump from Bill O'Reilly, the bestselling author of the Killing series, based on exclusive interview material and deep research.

Readers and listeners around the world have been enthralled by journalist and New York Times bestselling author Bill O’Reilly’s Killing series—riveting works of nonfiction that explore the most famous events in history. Now,O’Reilly turns his razor-sharp observations to his most compelling subject thus far—President Donald J. Trump. In this thrilling narrative, O’Reilly blends primary, never-before-released interview material with a history that recounts Trump’s childhood and family and the factors from his life and career that forged the worldview that the president of the United States has taken to the White House.

Not a partisan pro-Trump or anti-Trump book, this is an up-to-the-minute, intimate view of the man and his sphere of influence—of “how Donald Trump’s view of America was formed, and how it has changed since becoming the most powerful person in the world”— from a writer who has known the president for thirty years. This is an unprecedented, gripping account of the life of a sitting president as he makes history.

As the author will tell you, “If you want some insight into the most unlikely political phenomenon of our lifetimes, you’ll get it here.”

Bill O'Reilly is a trailblazing TV journalist who has experienced unprecedented success on cable news and in writing fifteen national number-one bestselling nonfiction books. There are currently more than 17 million books in the Killing series in print. He lives on Long Island.

Bill O'Reilly is a trailblazing TV journalist who has experienced unprecedented success on cable news and in writing fifteen national number-one bestselling nonfiction books. There are currently more than 17 million books in the Killing series in print. He lives on Long Island.

Rick Adamson has twenty years of experience in voiceovers, spoken word, acting, corporate sales training, and award-winning audiobook narration.  He is a Grammy nominee and an American Library Association award-winning narrator.  Most notably, his work includes reading for authors such as Bill Gates, Al Franken, O. Henry, and Susan Wilson, as well as Fast Food Nation, The Secret, and The Ransom of Red Chief. Adamson has done voiceovers for many Fortune 500 companies such as AT&T Labs, Pfizer, Merrill Lynch Online, Prudential Advisor, and Tyco. As a stage actor, he has performed both in NY theater and regional theater in productions such as You're a Good Man, Charlie Brown, Annie, and Cat on a Hot Tin Roof.