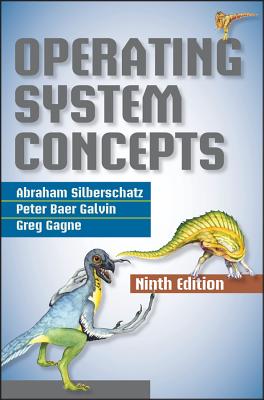 By Abraham Silberschatz, Peter B. Galvin, Greg Gagne
Email or call for price
Out of Print

Operating System Concepts, now in its ninth edition, continues to provide a solid theoretical foundation for understanding operating systems. The ninth edition has been thoroughly updated to include contemporary examples of how operating systems function. The text includes content to bridge the gap between concepts and actual implementations. End-of-chapter problems, exercises, review questions, and programming exercises help to further reinforce important concepts. A new Virtual Machine provides interactive exercises to help engage students with the material.

Abraham Silberschatz is the Sidney J. Weinberg Professor of Computer Science at Yale University. Prior to joining Yale, he was the Vice President of the Information Sciences Research Center at Bell Laboratories. Prior to that, he held a chaired professorship in the Department of Computer Sciences at the University of Texas at Austin. His research interests include database systems, operating systems, storage systems, and network management.Professor Silberschatz is a Fellow of the Association of Computing Machinery (ACM), a Fellow of Institute of Electrical and Electronic Engineers (IEEE), a Fellow of the American Association for the Advancement of Science (AAAS), and a member of the Connecticut Academy of Science and Engineering. He received the 2002 IEEE Taylor L. Booth Education Award, the 1998 ACM Karl V. Karlstrom Outstanding Educator Award, and the 1997 ACM SIGMOD Contribution Award. In recognition of his outstanding level of innovation and technical excellence, he was awarded the Bell Laboratories President's Award for three different Projects -- the QTM Project (1998), the DataBlitz Project (1999), and the NetInventory Project (2004).Professor Silberschatz' writings have appeared in numerous ACM and IEEE publications and other professional conferences and journals. He is a coauthor of the textbook Database System Concepts. He has also written Op-Ed articles for the New York Times, the Boston Globe, and the Hartford Courant, among others. Peter Baer Galvin is the chief solutions architect for Pluribus Networks (www.pluribusnetworks.com). Previously he was the CTO for the systems integrator Corporate Technologies, and a lecturer at Boston University. He has also been a columnist for;login:, SunWorld, and SysAdmin magazines, and has written articles for Byte and other magazines. Mr. Galvin blogs for anewdomain.net and byte.com. As a consultant and trainer, he has given talks and tutorials on security and system administration worldwide. Greg Gagne is chair of the Computer Science department at Westminster College in Salt Lake City where he has been teaching since 1990. In addition to teaching operating systems, he also teaches computer networks, parallel programming, and software engineering. He has made presentations at educational conferences and also provides workshops to industry professionals. Professor Gagne was the recipient of the Shaw Faculty Publication Prize in 2007.