Spies Among Us: How to Stop the Spies, Terrorists, Hackers, and Criminals You Don't Even Know You Encounter Every Day (Hardcover) 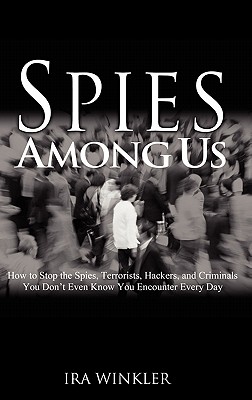 By Ira Winkler, Winkler
Email or call for price
Out of Print

Ira Winkler has been dubbed -A Modern Day James Bond- by CNN and other media outlets for his ability to simulate espionage attacks against many of the top companies in the world, showing how billions of dollars can disappear. This unique book is packed with the riveting, true stories and case studies of how he did it-and how people and companies can avoid falling victim to the spies among us.

American corporations now lose as much as $300 billion a year to hacking, cracking, physical security breaches, and other criminal activity. Millions of people a year have their identities stolen or fall victim to other scams. In Spies Among Us, Ira Winkler reveals his security secrets, disclosing how companies and individuals can protect themselves from even the most diabolical criminals. He goes into the mindset of everyone from small-time hackers to foreign intelligence agencies to disclose cost-effective countermeasures for all types of attacks.

In Spies Among Us, readers learn:
* Why James Bond and Sydney Bristow are terrible spies
* How a team was able to infiltrate an airport in a post-9/11 world and plant a bomb
* How Ira and his team were able to steal nuclear reactor designs in three hours
* The real risks that individuals face from the spies that they unknowingly meet on a daily basis
* Recommendations for how companies and individuals can secure themselves against the spies, criminals, and terrorists who regularly cross their path.

Ira Winkler, dubbed a modern-day James Bond, began his career with the super-secret National Security Agency as an undercover security analyst. Since then he has assisted various agencies of the United States and other governments, as well as major corporations, in their battle against the technological underworld. Relentless in his dedication to sealing security breaches, he has -stolen- billions of dollars from huge corporations, lifted nuclear reactor designs in less than four hours, and hacked into multinational networks. In a single day, he siphoned off a billion dollars' worth of information from a leading corporation, exposing a potentially disastrous security gap. Along with espionage simulations and penetration testing, he also investigates cybercrime. Visit his Web site at www.irawinkler.com