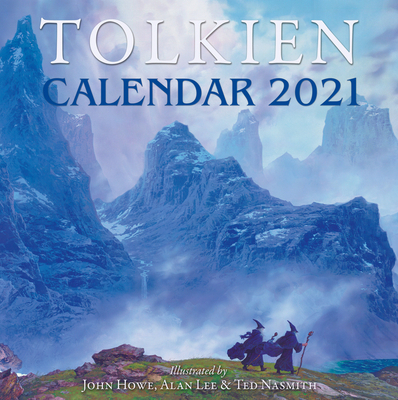 The official Tolkien calendar has become an established publishing event, eagerly anticipated by Tolkien fans the world over. Previous Tolkien calendars have become much sought after collector’s items, and this year’s will doubtless be an essential purchase for Middle-earth fans everywhere, as it celebrates the 40th anniversary of Unfinished Tales.

To commemorate this special occasion, three of the world’s finest Tolkien artists – Ted Nasmith, John Howe, and Alan Lee – have each contributed four full-color artworks to the Calendar. To accompany each painting, every month features complementary pencil drawings or sketches selected by the artists which are exclusive to this calendar.

In this unique artistic combination, Alan, John and Ted present scenes from the First Age of The Silmarillion, the Second Age of Númenor and the fall of Sauron, and the Third Age of The Hobbit and The Lord of the Rings, which will take the reader deeper into the world of Middle-earth than ever before.

John Ronald Reuel Tolkien (1892-1973) was a major scholar of the English language, specializing in Old and Middle English. Twice Professor of Anglo-Saxon (Old English) at the University of Oxford, he also wrote a number of stories, including most famously The Hobbit (1937) and The Lord of the Rings (1954-1955), which are set in a pre-historic era in an invented version of the world which he called by the Middle English name of Middle-earth.