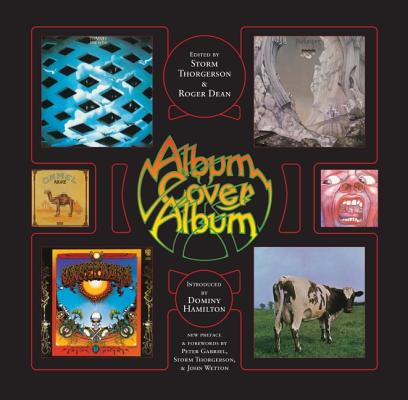 By Roger Dean, Storm Thorgerson
Email or call for price
Hard to Find

A stunningly designed review of the greatest album cover designs, spanning the classic period from the 1950s to the 1970s, Album Cover Album first hit the bestseller charts in 1977. This led to the release of six follow-up hits, inspired a host of imitations, and generated a long-playing sub-genre in art and design publishing.

Album Cover Album is edited and compiled by two designers who were among the most innovative pioneers of the work that it celebrates. Storm Thorgerson's Hipgnosis earned world renown for the epic photo shoots and iconic designs that went so perfectly with the music of Pink Floyd. Meanwhile, Roger Dean's dreamscapes and unique typography became as much a part of the rock generation as the Yes albums they adorned. Album Cover Album features their selection of more than 600 sleeves in full color, and showcases the astonishing diversity and excellence of design that the medium produced in its first three decades.

This new edition retains the lavish 12-inch format of the original and replays the ingeniously themed compositions of each page. The album is given a fresh spin by a new preface from Peter Gabriel and new forewords by Storm Thorgerson and John Wetton, plus a 21st-century typographic facelift. The result is a celebration of the enduring appeal of vinyl.

Roger Dean is internationally acclaimed as an artist and designer whose evocative and visionary images created a new genre. Made popular through the medium of album covers and posters, his work has sold in excess of 100 million copies. Roger became widely known in the 1970s for his album cover designs for Yes—including the classic logo now in the Victoria & Albert Museum in London—and a poll of Rolling Stone readers selected five of his designs in the top twenty best album covers of all time.